Marijuana Seeds In Nevada For Sale

The changing laws now allow more people to grow and buy marijuana seeds in Nevada than ever before, there are however, a few rules and regulations that must be obeyed in order to qualify. Nevada implemented a medical marijuana program in 2001, allowing registered patients over the age of twenty-one the legal right to possess and grow their own marijuana plants. Up to twelve plants could be grown, with six in flower at any one time. Public possession to a maximum of one ounce was also permitted under the medical marijuana legislation.

One of the key points to growing and buying marijuana seeds in Nevada, is the distance you live from a registered marijuana dispensary. Although Nevada is the seventh largest state, much of it’s land is semi-arid desert and uninhabitable, with the majority of it’s residents living within the twenty-five mile radius of a local dispensary. Within the boundary, growing marijuana in Nevada isn’t permitted, unless you were already allocated a licence prior to the dispensary opening.

Growing marijuana indoors usually produces the highest quality buds, as far greater control can be maintained over the growing area. Daylight hours can be provided via high powered lights, and altered at will to induce flowering when required. Temperature and humidity levels can have an effect on both the yield and quality from each plant, and growing marijuana seeds indoors in Nevada is the only way to control the plants development, rather than growing outdoors and relying on nature to provide for the plants needs.

Feminized marijuana seeds offer the best return per square meter, guaranteeing that each of the six plants that you are legally permitted to grow will produce a female plant capable of creating the harvest you desire. Only female marijuana plants produce buds, the males produce pollen to fertilize the female’s, creating the next generation of seeds. Ensuring that each of the six plants you are legally permitted to grow are female, is the best way to begin maximizing the return from your growing area. We have a wide selection of both recreational and medical marijuana seeds for sale, with ‘old-school’ classics, as well as a variety of some of the best loved and most popular new varieties. Any of our feminized marijuana seeds for sale can be grown indoors, given the right conditions, but we recommended buying seeds and strains that suit your level of experience, for the best harvests. 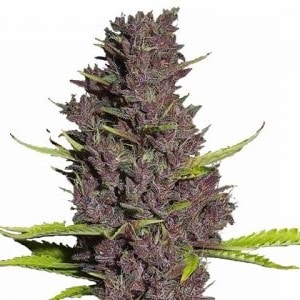 Extremely aromatic and filled with an explosive fruit flavor, Blue Dream is an highly popular West Coast strain producing a relaxing and balanced high. Easy to grow and capable of producing large harvests, a perfect choice for indoor growers.

Growing marijuana seeds outdoors in Nevada isn’t going to be easy. Although the state has large areas of land where ‘guerrilla’ growing methods may be practiced, much of it is desert and unfit for growing anything. Extreme heat during the day, and cold night temperatures offer little help for a growing plant, and producing a healthy and worthwhile harvest outdoors is difficult. Living more than twenty-five miles from your nearest dispensary allows you to grow up to twelve plants legally, and planted close to your home, you may be able to provide the plants with enough care and attention to produce a good harvest, by selecting the right seeds and strains.

Feminized seeds are a good option, but as they require a reduction in daylight hours to commence flowering, they are not always the best choice. Planted outdoors in the Spring, the seedling will grow throughout the Summer, and start to flower as the the Fall approaches. The plant will require a full season to grow, flower and fully mature, making a maximum of one large crop per year. Autoflowering seeds are also feminized, but unlike traditional feminized seeds, require no reduction in daylight hours to begin flowering, preferring to produce their biggest and most potent harvests when exposed to as many daylight hours as possible. Easy to grow and requiring approximately ten weeks from germination to harvest, autoflowering seeds are a great choice for outdoor marijuana growers, regardless of their level of experience. 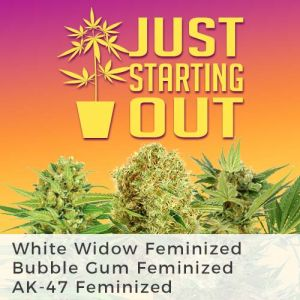 Ideal for those just starting out, this mix pack contains White Widow,Bubblegum and AK-47 feminized seeds.
Show Me The Seeds 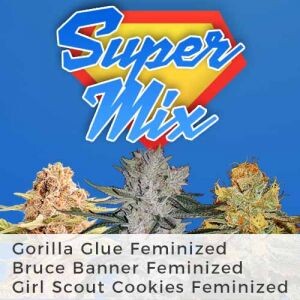 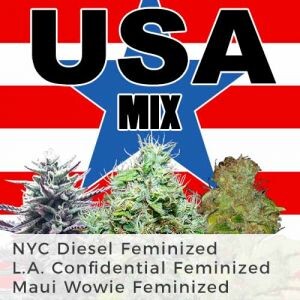 Whether it’s indoor or outdoor, regular, autoflowering or feminized marijuana seeds you require, we offer the highest quality online. Each seed is hand picked and packed to ensure only the very best, mature seeds are dispatched, each guaranteed to germinating, creating a strong, vibrant plant with the traits and characteristics you selected. Payment includes guaranteed delivery, with no added costs and should for any reason, your seeds fail to arrive, replacements will be shipped as soon as possible at no extra cost.

Download the free, no obligation growing marijuana guide available here, and learn some of the techniques and methods adopted by professional and commercial growers to enhance the quality and quantity of their harvests. Enjoy complete security with a selection of payment options including Bitcoin, cash and debit/credit card facilities, as well as all the help and assistance you need when you buy marijuana seeds in Nevada online through us.

Learn How To Grow Marijuana Plants

Marijuana grow guides, learn the basics from building a grow room to starting your seeds and through the different stages to harvest.

Plant care guides, follow the steps and be aware of the signs of nutrient effeciences, pests,diseases and more…

Medical Guides, With more USA states legalizing marijuana learn about growing your own medical marijuana and its uses and effects

The grow bible also teaches you how and when you should harvest your plants for maximum taste, potency and how to get the most THC

GET YOUR FREE MINI-GUIDE!